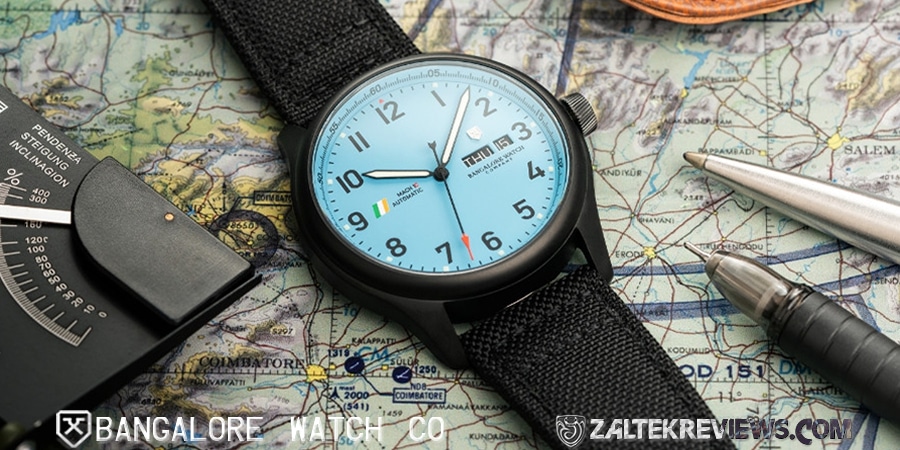 Bangalore Watch Company are set to release a brand new variant of their extremely popular range of Mach 1 pilot watches, available from 17th September 2020. This time around however, the Mach 1 sports a matte, pastel blue dial with black arabics and negative, white on black day/date wheels. Bangalore Watch Company (BWC) have subsequently named it the “Officers’ Blue Mach 1“, thus bringing a fresh new vibrant colour into their collection. This shade of blue does however, actually appear in the Indian Air Force in many forms; like the IAF flag, as well as on their officers’ uniforms.

These Mach 1 Officers’ Blue variants from BWC just extend the storyline of an IAF inspired watch collection even further. You might actually be thinking that this is a rather bold move by BWC as traditionally, pilot watches are of a much more monochrome affair, that places legibility as their number one priority. Personally speaking though, I think that it’s an excellent idea! I own plenty of dive and sports watches, but that doesn’t mean to say that you’ll find me at a 200m depth down near the seabed. Even more relevant, especially these days, I’m about as “sporty” as Peter Griffin from Family Guy. I digress… Here’s a bit more information regarding the Mach 1 Officers’ Blue from Bangalore Watch Company.

Bangalore Watch Company are a husband and wife team; Nirupesh Joshi and Mercy Amalraj, that have called Bangalore home for over fifteen years. Fascinated by the world of fine watchmaking, during their time spent in parts of Asia, they returned home leaving behind their tech careers in Hong Kong to start an Indian origin fine watch brand in early 2017. With a combined two decades of technology experience spanning sales, quality assurance, solutions design and strategy along with a high attention to detail, allowing them to quickly pivot into the microbrand watch industry. They are essentially industry outsiders, but they’re proud of that fact. After over a year of learning the trade, scouting for the best suppliers, design & prototyping, they launched their debut timepiece, the Renaissance Automatic back in early 2018.

In December 1971, the Bangladesh liberation movement in East Pakistan was at its peak. The enemy Air Force launched pre-emptive strikes on Indian Air Force bases in the western and eastern fronts. It was during these crucial times that the MiG 21 FL Type 77 (NATO Codename; FISHBED) played a critical role in defending India’s airspace. Type 77 was the first supersonic fighter jet of the IAF to be built in India by HAL. It created an air-superiority umbrella so fierce that the enemy Air Force was forced to ground their planes. After serving the IAF for five decades, the MiG 21 Type 77 retired in 2013. The Bangalore Watch Company MACH 1 collection pays tribute to this very iconic plane.

The Alcadus Opus 39 in black, is my choice for tod

The more I wear this new Freediver from @traskawat