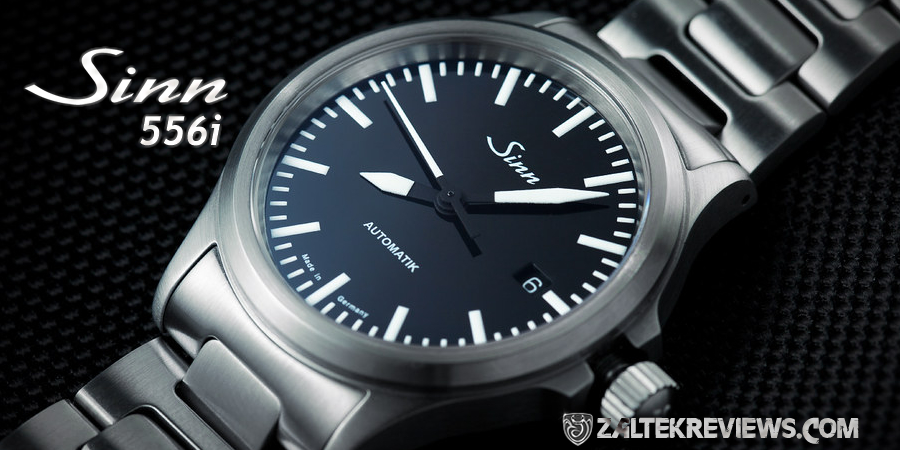 Yet again, my good friend Dennis Kwok has come to the rescue and sent me his Sinn 556i to review. I’ve had Sinn on my radar for years and although I’ve tried to source one for review, I’ve had zero luck. I wasn’t going to blow £1,000+ either, just to see if they’re any good. I’ve always liked the look of the Sinn 104, but the vast amount of polishing on them always put me off. Looking at the entire model range from Sinn, I’ve always thought that the 556i would tick all my boxes. Only 2 weeks ago, I had a major clear out of watches from my own collection, and I was just a ‘baw hair‘ away from buying a 556i on the H-link bracelet, when Dennis graciously offered me the opportunity to try his own personal one before I pull the trigger. So, is it the perfect everyday watch that everyone keeps banging on about? In a word, NO. Let me explain…

"Following its foundation in 1961, the company focused on the manufacture of navigation cockpit clocks and pilot chronographs and sold these through direct selling, bypassing retailers. The clocks and watches were produced according to pilot Helmut Sinn’s specifications in the private label sector in Switzerland. By eliminating the trade margin of the retailers, the company was able to offer its clocks and watches at a lower price than through traditional sales channels.

In 1994, Helmut Sinn sold the company to Lothar Schmidt. Following the sale, he acquired Swiss watchmaker Guinand in 1996. In 1998, he set up a new company in Frankfurt am Main. With this company, he offered brand watches from Jubilar, Chronosport and the newly acquired Guinand. In 2006, he retired from business activity. After handing over the management of the business to his long-standing employee Horst Hassler, he acted as an advisor to the company. On September 3, 2016 Helmut Sinn celebrated his 100th birthday. His death was announced in February 2018 at the age of 102.

Certified engineer Lothar Schmidt began working for Sinn Spezialuhren in September 1993. Prior to this, he had been working since 1981 for International Watch Company (IWC) in Schaffhausen, Switzerland, first as a freelancer, then as an authorised representative. He was responsible for setting up and operating case and strap production, as well as construction and design. Subsequently, he was in charge of setting up and operating component production. From 1990 up until his retirement, he was also in charge of overseeing the development of production and logistics at the then-subsidiary of IWC, A. Lange & Söhne in Glashütte, Saxony, which had been restored following the collapse of the East German government.

Under his leadership, Sinn Spezialuhren underwent major changes. It split from the private label sector, expanded its model range, and developed its own watch models and innovative technologies. In addition to direct selling, Lothar Schmidt introduced the concept of distributors, selected watchmakers who also sell the watches. Furthermore, the name of the company was changed to Sinn Spezialuhren GmbH. Most of the company’s watches are assembled and regulated in Frankfurt am Main. Over 12,000 watches are currently sold every year." - extract from wikipedia.org.
Previous
Next

The case of the Sinn 556i has an overall diameter of 38.6mm. The lug to lug is 45.4mm and the overall thickness, including the sapphire crystal, albeit flat, I measured in at a very svelte 11.1mm. The entire case, bezel, crown and bracelet are all “satinized” 316L stainless steel. The finish itself, although entirely brushed, (giving the watch its very tool watch like aesthetic), does have a very slight satin effect to the overall finish, that you can see in some light. It’s a bit like some watches that have had hardening coating done to them, similar to the Hamtun Nanok or the Traska Freediver II. 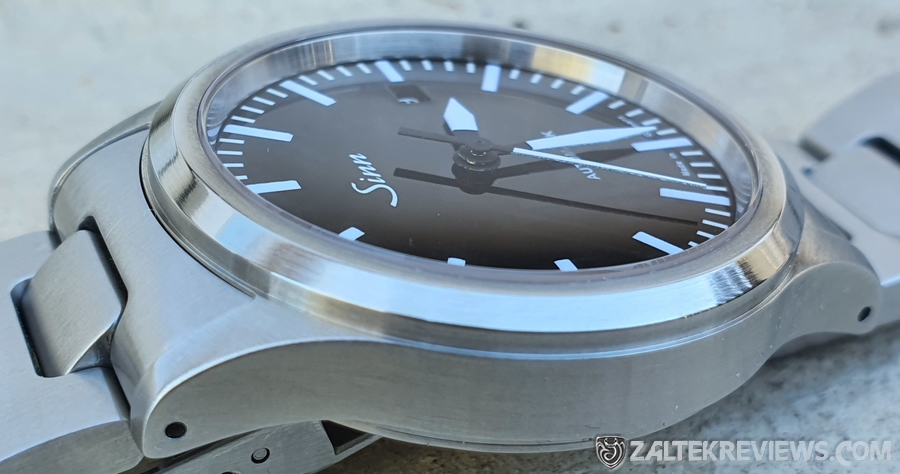 The Sinn 556i has a rather substantial water resistance rating of 200m, which is way more than expected, especially from what essentially is, an everyday sports watch. The proportions of the 556i and the way it wears on wrist, in my opinion, is nothing less than absolute perfection. No sharp edges anywhere, overall, the Sinn 556i is extremely comfortable and is probably the perfect choice for everyday wear. There’s no fancy chamfered edges or polishing to be found anywhere and to be honest with you, the 556i would look worse if it had. This watch doesn’t need to try to be brilliant, it just is! 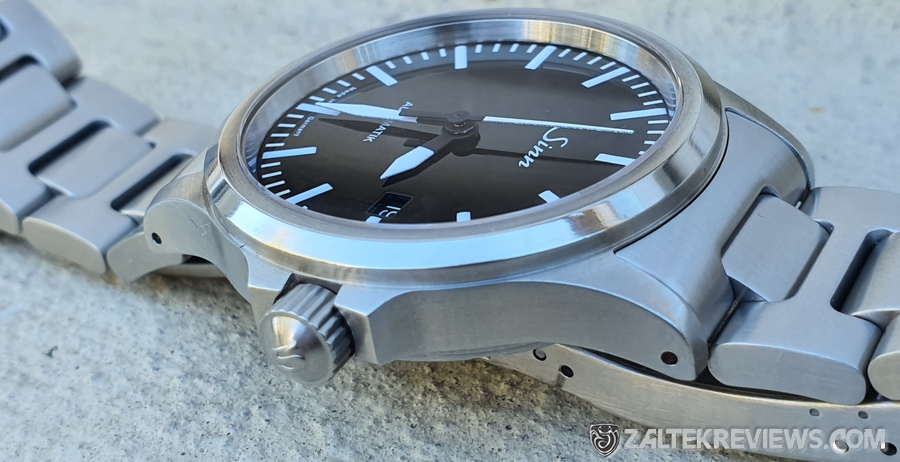 The signed crown is superb, has plenty of grip and is of a decent size, not too small nor too large. It’s just spot on for the overall size of the watch. There is zero wobble either when the crown is in use and you can also feel a nice little pop as you unscrew it. Oh yeah, winding this movement is super-smooth and a pleasure to operate. Looking at the caseback that you can see in the image below, this people… is how an exhibition display caseback should be done! Extremely well made, perfectly executed, sapphire crystal that’s also AR coated on the underside and a sexy movement to gawp at. #JobDone 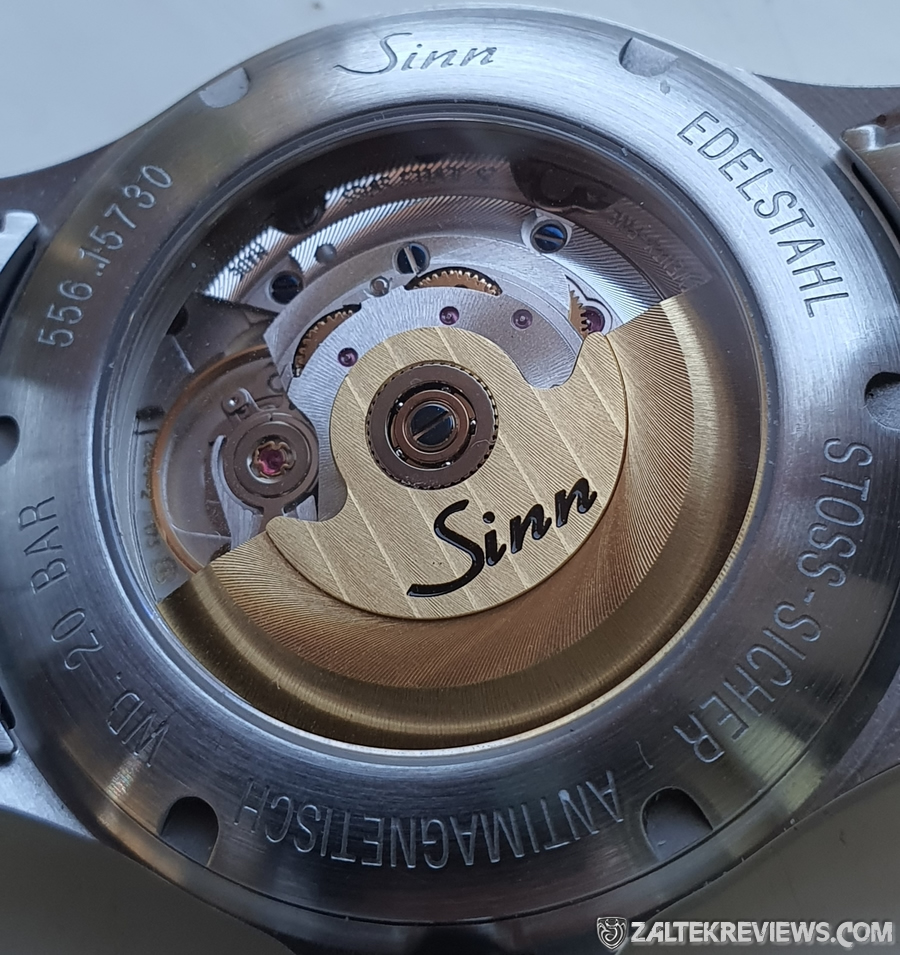 Before I get started on the bracelet, you can pick up the Sinn 556i on a leather strap, thus saving you a small chunk of cash. There are also approximately 25 different leather strap options to choose from. I’m much more of a bracelet guy though, so I’m glad when the 556i arrived, that it came on the H-link bracelet. The bracelet itself is a gorgeous 20mm brushed 316L stainless steel bracelet that definitely just oozes pure and utter quality. It is leagues above the usual bracelets that I’m used to seeing… the best part? Without question, are the hex-bolts that keep everything together. They are so brilliantly manufactured it just beggers belief. With the tools that are supplied with the 556i, there is absolutely zero chance of scratching the bracelet either, unless you’ve had 14 pints of lager and your name is Stevie Wonder.

Even although the bracelet is one of the nicest parts of the Sinn 556i, disappointingly, it is also one of the worst parts of the watch. There is no polite way of saying this, but the clasp is utter SHITE! I can’t believe Sinn thinks that this clasp is acceptable on a watch that costs around £1,000.

I could be sitting at my desk, typing away on my keyboard and all I can hear is the flip-lock part rattling like a Chinese special. You might think, oh, it’s just a clasp, I could live with that. WRONG! This is actually a deal breaker for me, as I wouldn’t want this watch without a bracelet. I’m not a fan of their fine-link bracelet either, as it has a butterfly clasp. This is so annoying as the rest of the 556i is truly OUTSTANDING, only let down by this cheap and nasty clasp. Sort it out Sinn! 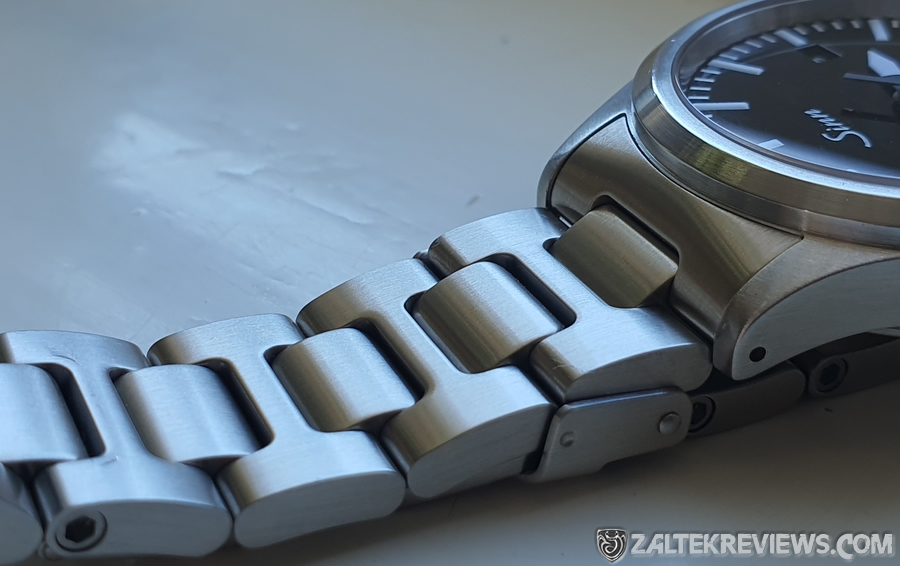 The chosen movement for this 556i is the ETA 2824-2 with the signature gold rotor from Sinn. There is a little confusion as to what actual movement you’ll get with the 556i, Sinn state the Sellita SW200-1 on their website however, some authorised dealers list the ETA 2824-2. To be fair, they’re just as good as each other in my opinion.

Checking the accuracy after running the Sinn 556i for around a week, mainly on my wrist and occassionally in my watch winder, I was absolutely gobsmacked with it showing an average of just +2.9 spd. I’m not sure if the movements are regulated or not, as there is nothing listed on the Sinn website, either way, it’s an absolutely fantastic result!

The Sinn 556i has a totally fixed bezel with a matching brushed finish. The text is printed, showing the words Sinn & AUTOMATIK, with Made in Germany at the usual position, giving the watch a super clean and very legible aesthetic. 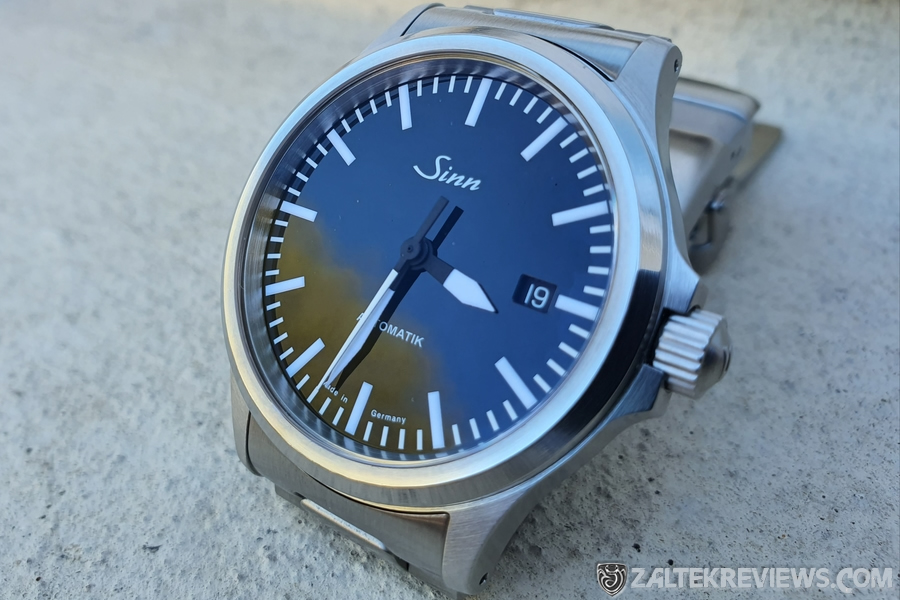 As you can see in the images, the hour and minute hands are very nicely done and look fantastic with their monochrome appearance. The size of the hands too are pretty much perfect in relation to the size of the dial. The matching seconds hand is a stunner too, with the tip of the hand reaching right out to the minute track. All three hands are finished in white with a matt black finish at their base. The hour markers and minute track are nothing less than very legible, which I love! 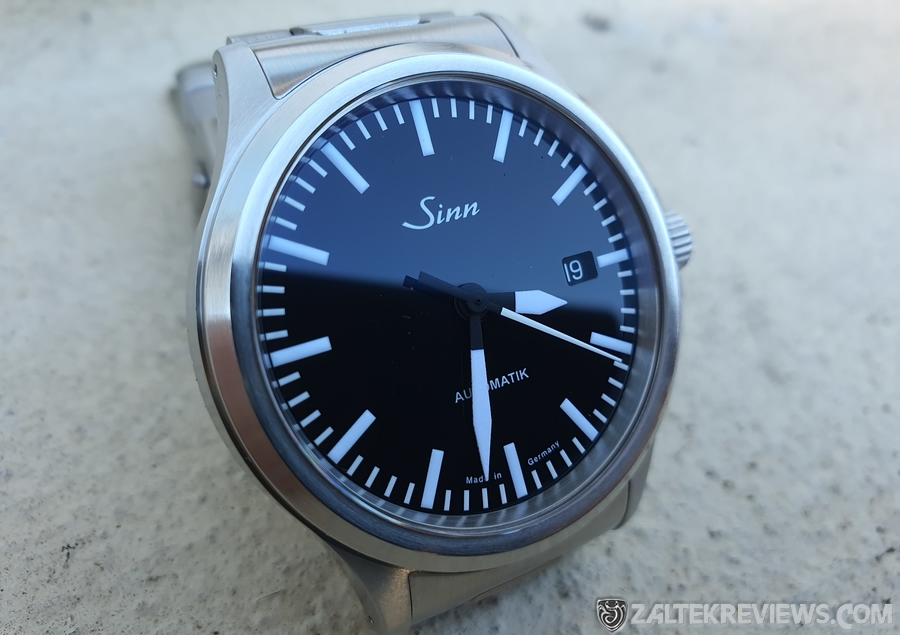 There is also the addition of a perfectly executed date cut out at the 3 o’clock position. I love a date complication, as you all know, especially when done right. Thankfully, the date wheel itself is also colour matched to the dial. That always gets bonus points from me. On this black model of the 556i, the actual colour, or shade of black used, is probably the blackest deepest black that I’ve ever seen. In real life, the black comes across more like a very deep and dark ink finish.

The lume on the Sinn 556i is pretty good for a sports watch. If have no idea of the actual formula that’s been applied as it’s not listed anywhere, but I could have a guess that it might be Swiss Super Luminova® C3. The lume itself is initially quite bright, but unfortunately, it doesn’t last any great length of time. 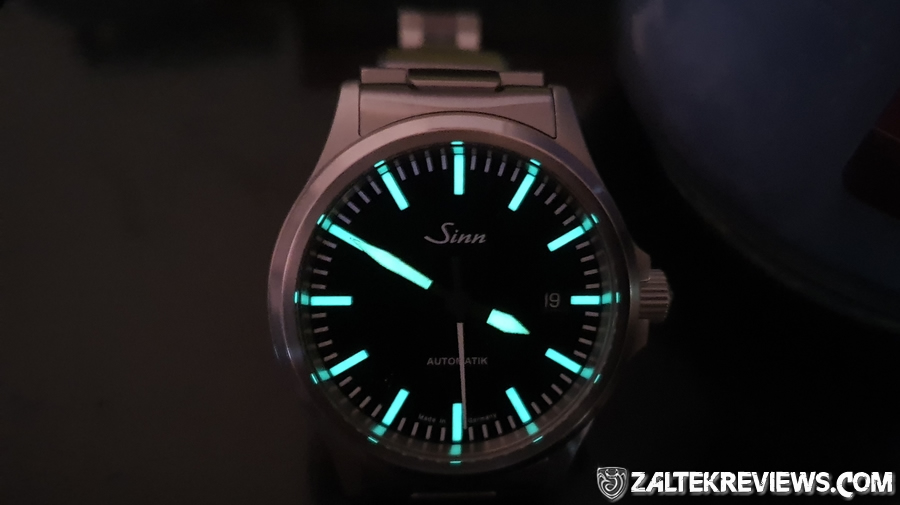 I was so looking forward to getting the Sinn 556i in for review, thinking it would be the one watch to beat them all. I really thought I’d be getting one of these after being lucky enough to try it out for a week before pulling the trigger. Unfortunately, I won’t be getting one. £1,000 is a LOT of money to spend on something you’re not entirely happy with. It’s a real shame too, as 90% of the watch is phenomenal, just let down by the shitty clasp!
With no alternative from Sinn either, as I wouldn’t want to fit something aftermarket as it wouldn’t be signed for one, and it’s not something I should have to do with a watch that costs this much. Such a shame really, it looks like I’ll be buying something else. What will that be? I’ve no idea. Yet.

Sinn – An outstanding sports watch, let down by one small component, the clasp.

Will Duncan Editor, Zaltek Reviews
A huge thank you goes to Dennis Kwok from our very own Facebook group WatchChat, for sending me his very own Sinn 556i to review. Thanks buddy, I really appreciate it.
To view the Sinn website, or to view their extensive model range, visit Sinn.de.
Follow Zaltek Reviews on Instagram, Twitter and Facebook and please feel free to join our Facebook group WatchChat, a busy community for watch enthusiasts and collectors, with tons of images and in-depth discussions.
At Zaltek Reviews, we encourage the companies whose watches we’ve reviewed to comment on our articles. We invite any company representatives to respond in the comments section below. Thanks very much.
Tags: 556i, made in germany, sinn