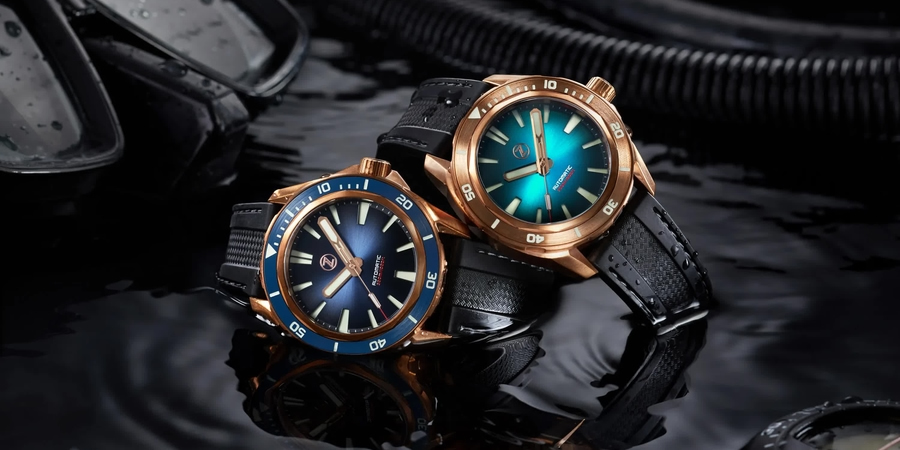 Introducing the Zelos Bronze Swordfish, a bronze dive watch with outstanding specifications for the limited time pre-order price. Is this another hit from Elshan at Zelos? This is my very first bronze watch that I get the pleasure of reviewing and I have to say, so far, I’m impressed. I really didn’t think I was going to like this due to the bronze materials. I was wrong! 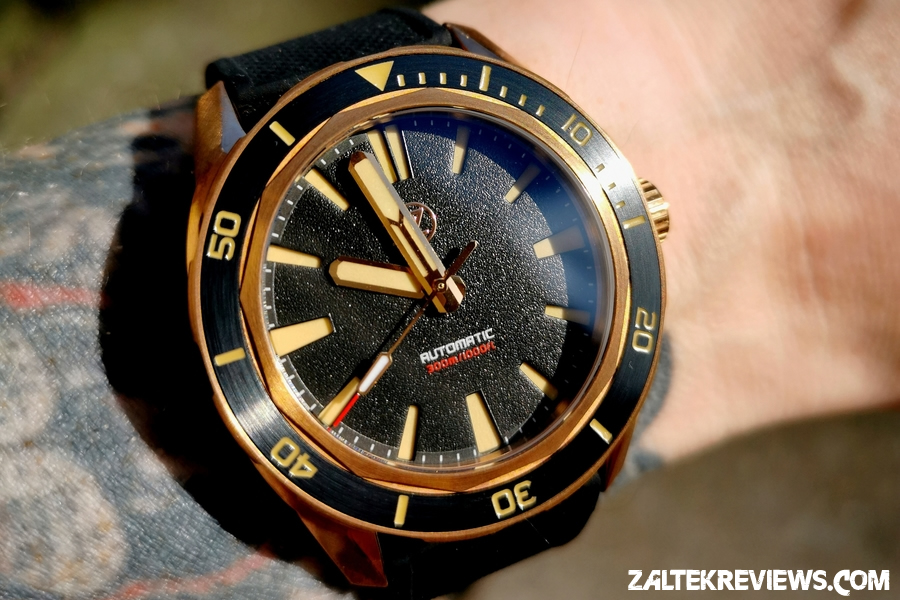 The case of the Swordfish is 42.3mm. The lug to lug is 47.2mm and the overall thickness, including the sapphire crystal I measured at 13.5mm. The entire case, bezel and crown are all CuSn8 bronze. Bronze has always been closely linked to the sea as it is one of the most corrosion resistant metals available. An oxide layer, called a patina, forms a protective skin over time to protect the metal. This patina individualizes each Swordfish, creating a completely unique timepiece.  What starts out as a shiny rose-gold, ages with time and the atmosphere and turns into a rustic brown colour. 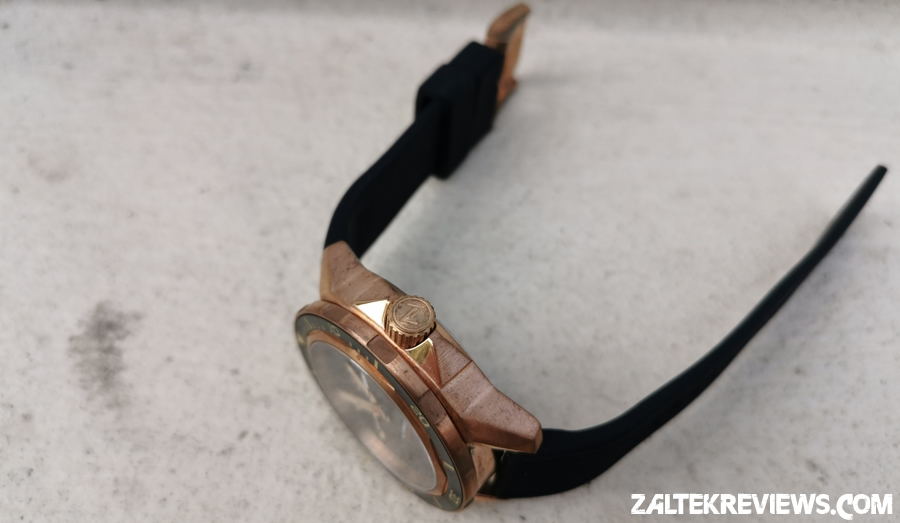 The Zelos Swordfish also has a water resistance rating of 300m / 30 ATM, thanks to the screw-down caseback & crown. The finish of the case is superb, with it entirely being made of bronze with a few polished accents on the inside edge of the lugs as well as the top edge of the crown guards. The proportions are, in my opinion, perfect for my 7″ wrist. Zelos state that the lug to lug is 48mm which is great for a watch with a 42mm diameter. I measured it at just 47.2mm. Even better! 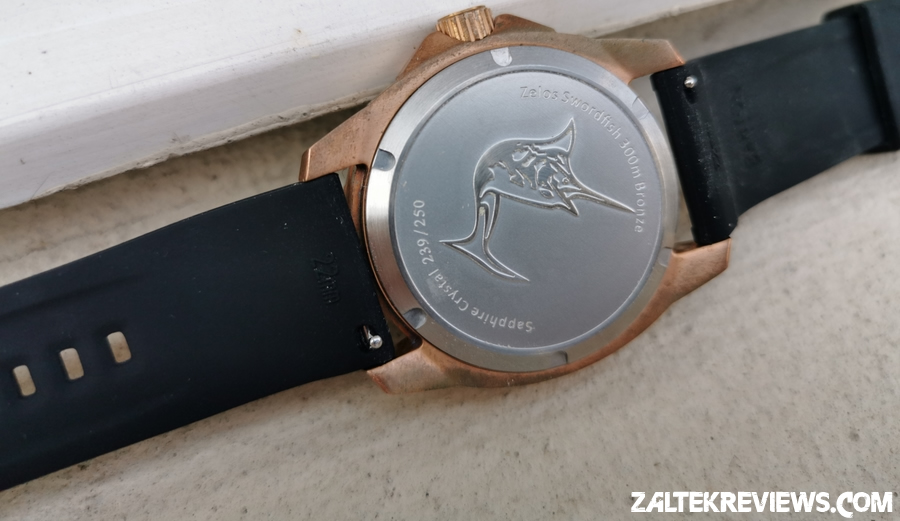 The straps that come with the Bronze Swordfish are great. You get a waxed Horween leather strap as seen with many previous Zelos watches. The quality is fantastic, however there is no matching bronze buckle fitted to this one, so you have to swap it over between the two straps that are included. To be honest, it’s not exactly hard is it. #1stWorldProblems
The strap that comes fitted to the watch is something new from Zelos. It is probably the best rubber strap I’ve encountered in all the years I’ve been a “watchaholic”. It has a very premium feel and doesn’t attract fluff or bits of crap that does happen with lesser quality rubber straps. There is however, a problem with it for me and my 7″ wrist. The size. It’s not overly big or anything like that, it’s just when I put it on there was that wee extra flap hanging like a friggin’ dangleberry. I hate that, it is my pet peev with all straps if they’re just too big. I understand that Elshan from Zelos got quite a few people complaining that the older original silicone strap was too small. 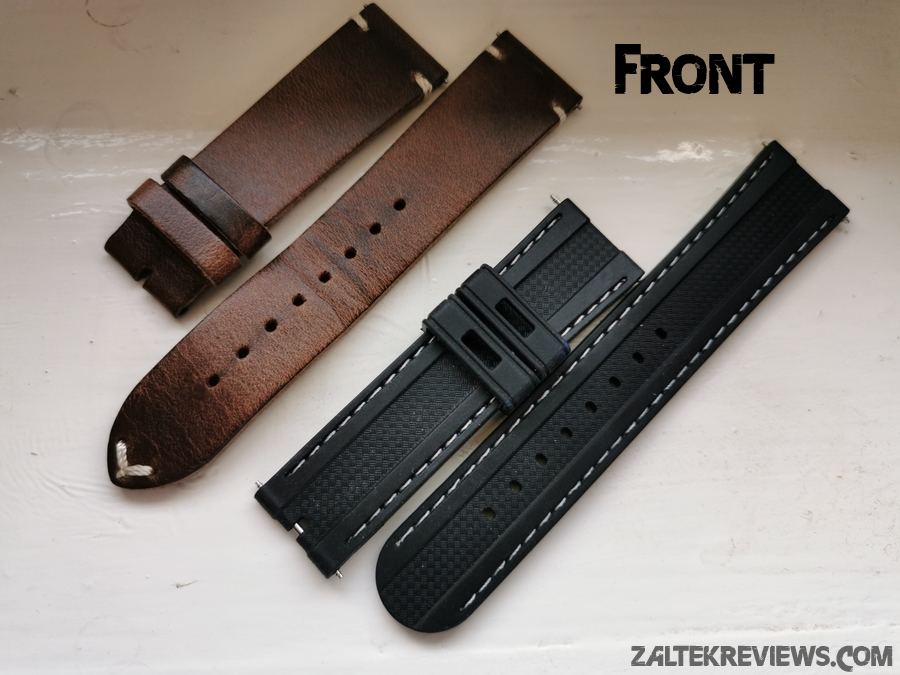 I know you can’t please everyone, however, I think I have the solution. Wouldn’t it be easier to provide 2 lengths of the part of the strap with the sizing holes just like Barton straps do with their Elite Silicone line? I understand this would add more expense, but I wouldn’t mind paying a bit extra for a strap that fits perfectly. Or how about just having the one strap included with the watch to save costs? It’s such a shame that Zelos includes this new premium rubber strap yet I didn’t want to wear it due to the length. Anyway, that’s just my 2 cents… it’ll fit perfectly for a lot of other people. 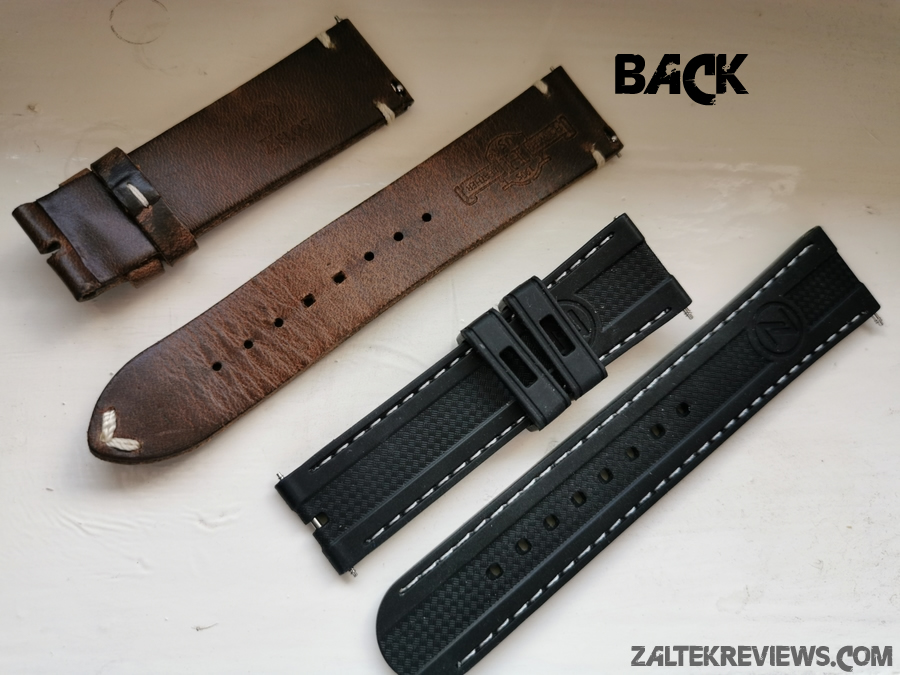 The chosen movement for this verion of the Swordfish is the microbrand go-to movement of choice, the super-reliable Seiko NH35. A great workhorse that is a 21,600vph, 3Hz, 24 jewel movement with self winding and of course hacking. Checking the accuracy after running the Swordfish for around a week, mainly on my wrist and occasionally in my Barrington Watch Winder, I thought the accuracy was spectacular with it showing an average of, get this… +0 spd. WOW! I have absolutely no idea if the watch had been regulated before being sent out. Either way, I’m not going to complain!

Whatever dial version of the Swordfish you decide on buying there is also the choice of upgrading the movement to the Swiss Made ETA 2892, a 4Hz, 28,800vph movement. What’s the point I hear you ask. Well, you get a colour matched date complication at the 6 o’clock position. Additionally, you’ll get a sapphire display caseback to show off that Swiss sexiness. Personally, I prefer a 4Hz, smooth sweep movement in all of my watches, so maybe Zelos could have offered a Sellita SW200 or a Miyota 9015 to reduce the costs of an upgrade over the Seiko NH35. Just an idea that might prove popular? 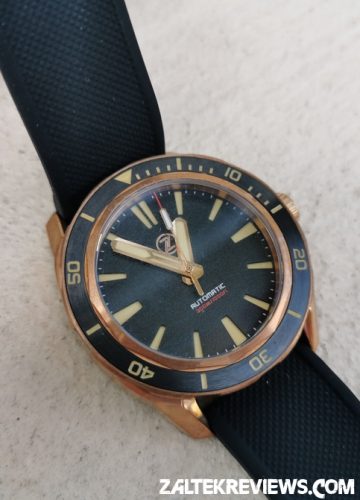 The Bronze Swordfish has a 120 click unidirectional bezel with a ceramic insert. The bezel action is perfection with zero backplay. All versions apart from the meteorite version (not the blue meteorite) have a matt ceramic bezel insert. The meteorite version has a bronze insert.
I would point out, if you do buy any bronze watch (not just from Zelos) with a bronze bezel, you need to turn the bezel on a regular basis especially if the watch is subject to sea water regularly as the bezel could seize over a period of time. The dial is of the sandwich variety, and very nice it is too! All the hour markers are also pumped full of lume. Zelos are the microbrand masters of lume application!
The logo is also neatly applied and the text on the dial is very nicely printed and perfectly legible with a fantastic choice of font. The hour and minute hands are also spot on with their big, beefy, chunky appearance. I do like the seconds hand too, with its fully lumed section and red tip that reaches out all the way to the minute track.

The bronze Zelos Swordfish with the NH35 movement is an absolute steal at the pre-order price of only $299. The build quality and attention to detail is quite simply, phenomenal! If you’re looking for a bronze dive watch, I would highly recommend the Swordfish. At this price, there is quite simply, nothing better on the market.
Option wise, if it was me personally, and my hard earned cash, I think I’d choose either this black sand option, or if my budget could stretch to it, I’d opt for the blue meteorite version.
Zelos – Excellent Job! You’ve knocked it out of the park again. A total home run! I’m not sure what your secret is Elshan, but whatever it is you’re doing, keep it up. Another absolutely fantastic watch from Zelos!
 10/10
10/10 HIGHLY RECOMMENDED
A huge thank you to Elshan from Zelos for sending out the bronze Swordfish so quickly. I apologise that the review was delayed due to setting up Zaltek Reviews new website. To view Zelos’ website, or join their mailing list to be informed of new models etc, visit Zelos Watches.
Follow us on Instagram and join our Facebook group WatchChat, a busy community for watch enthusiasts and collectors with tons of images and in-depth discussions.
At Zaltek Reviews, we encourage the companies whose watches we’ve reviewed to comment on our articles. We invite any company representatives to respond in the public comments section below. Thanks very much.
bronzedive watchswordfishzeloszeloswatches
By Will Duncan25th July 2019Diver, Bronze3 Comments on Zelos Bronze Swordfish 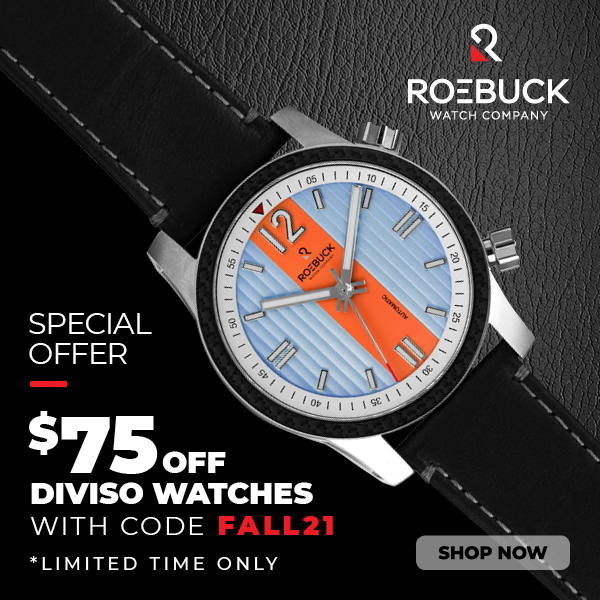