Spectre Time originally burst onto the microbrand scene with their original Phantom which I thought was an extremely great looking watch however, it wasn’t perfect. Cue the A-Team theme music and what do you know, here we have the new Phantom II. Did Murdock, Faceman, B.A. Baracus and Hannibal make a total hash of it? Lets find out… 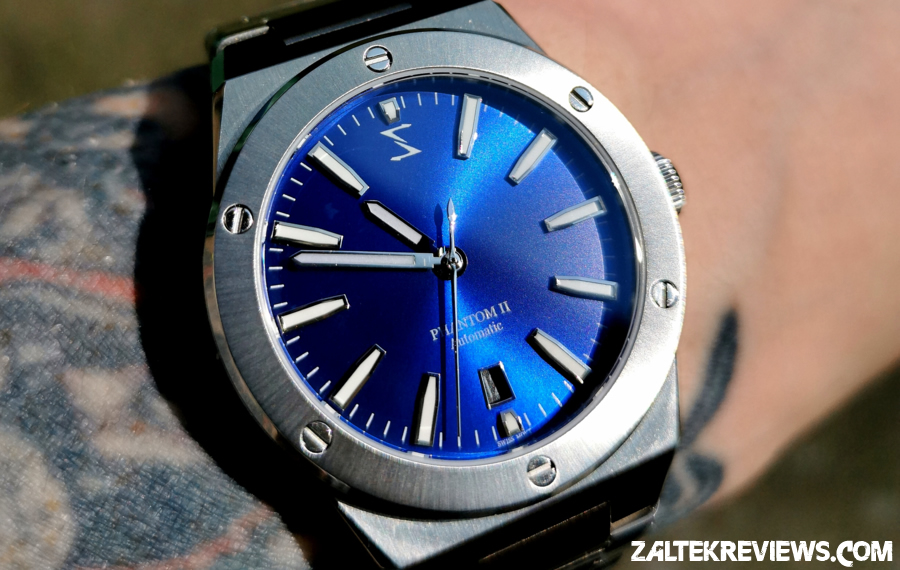 Spectre Time, a Singaporean microbrand was founded by Gulshan in 2015.  Gulshan was working as a flight attendant at the time, for the world-famous Singapore Airlines. Flying all over the world visiting different cities, meeting people from all walks of life and learning about new cultures opened Gulshans eyes and broadened his thinking and knowledge.

After saving for quite some time, he decided to invest in an Audemars Piguet Royal Oak – his first Swiss luxury wristwatch. Inspired by his purchase, he decided to take his passion a step further by designing, prototyping his own timepiece, a watch totally unique, just for his own personal enjoyment. After getting numerous compliments and purchase requests, Gulshan eventually decided to put the watch (which became the previously mentioned Phantom) into mass production and start his own watch label, that being of course, Spectre Time.

Gulshan also owns the watch brand, Velthor. Unfortunately, it never really took off as much as Spectre Time has. Gulshan does have plans to start promoting the brand again in the near future and promote their S1 Concept. I have spoken to Gulshan regarding this and we’ve both agreed that one will be sent out for me to do a review on it.

The case of the Phantom II is 39.2mm. The lug to lug is 47.6mm and the overall thickness, including the sapphire crystal I measured at 11.3mm. The entire case, bezel, bracelet and crown are all 316L stainless steel. The back of the watch itself utilises a sapphire display caseback showing off a very nicely decorated movement with various aesthetic touches including perlage (circular graining) finishing and geneva striping on the custom rotor. 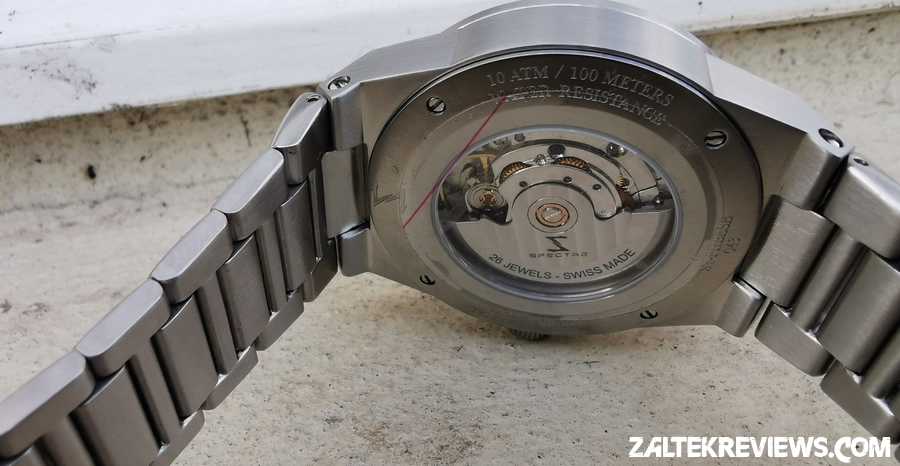 The Phantom II has a water resistance rating of 100m / 10 ATM, thanks to the screw-down caseback & crown. The finish of the case is superb, with it being brushed stainless steel with polished accents running along the side of the case and down over the edge of the lugs. The transition between the brushing and the polishing is flawless. The proportions of the watch are, in my opinion, great for my 7″ wrist. I initially throught the watch would be a little small but it wears great with the lug to lug distance of just under 48mm.

The Phantom II comes equipped with one of the nicest bracelets I’ve ever seen fitted to any microbrand watch. It is extremely well made with solid end links and each link is extremely smooth so I can guarantee you that it’s not one of those hair nippers. The finishing on the bracelet is brushed with what appears to be some kind of satin effect. I’m not sure if it has some sort of hardening coating or not, either way, it is very nice. The bracelet also features a nice chamfered edge which has been polished to match the finish of the case. The only negative I have is, there are no half links to ensure a perfect fit. 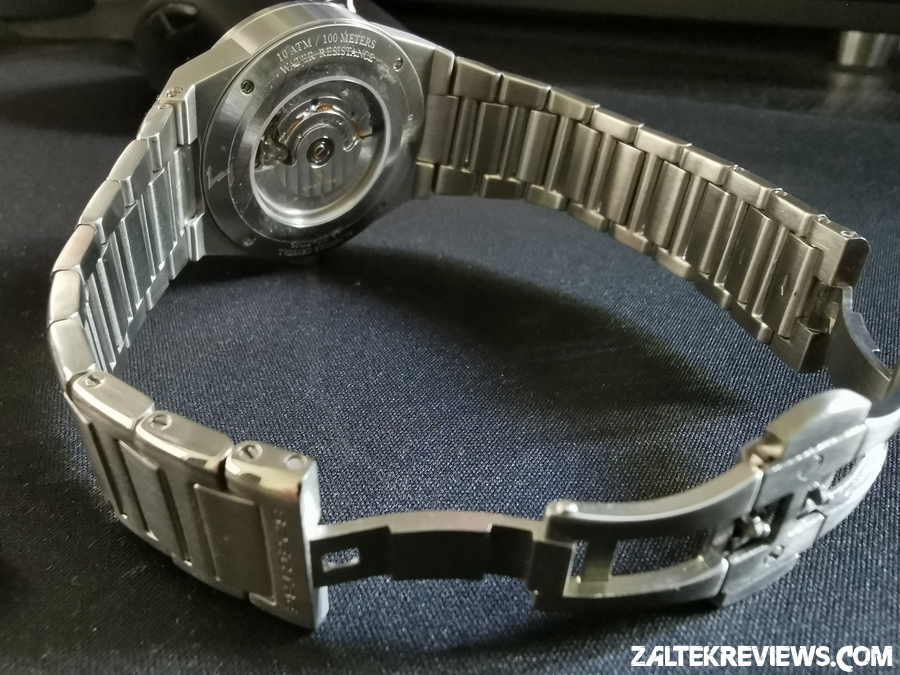 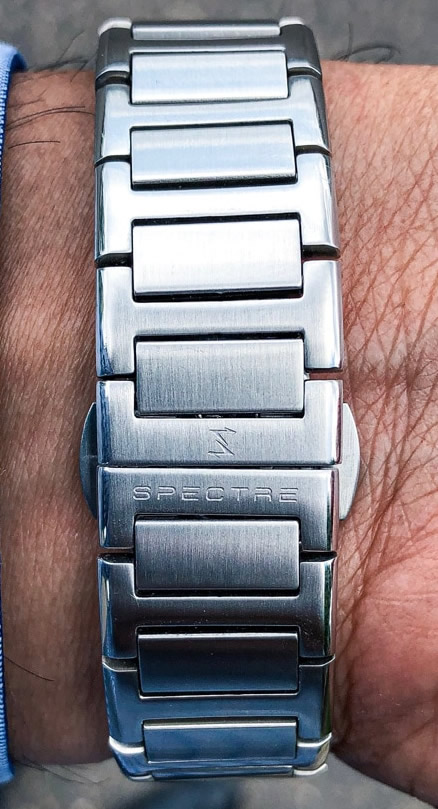 The bracelet tapers from 23mm at the lugs to 18mm at the clasp. The clasp itself is of the butterfly variety. As previously stated, the whole bracelet is of fantastic quality. Sized up for my 7-inch wrist I had to remove 4 links, which was easy enough to do with the screw pins for adjusting & re-sizing. Spectre Time also supply a screwdriver to do the job and it isn’t some crap 3 quid job from eBay either, it’s actually very nice and up there with the tools from Bergeon. High praise indeed!

While the original Phantom used the horrid (sounds like a basket of kittens in a tumble dryer) 8215 Miyota movement, the chosen movement for the Phantom II is a massive upgrade. A natural upgrade path would have been the Miyota 9015 (a great movement by the way) but no, Spectre Time opted for a very nicely decorated Swiss STP1-11 movement. Various finishing included are perlage (circular graining) finishing and geneva striping on the custom rotor. A very nice touch.

This movement from the Fossil group is a 28,800vph, 4Hz movement with self winding and of course hacking. Checking the accuracy after running the Phantom II for over a couple of weeks, mainly on my wrist and occasionally in my Barrington Watch Winder, I thought the accuracy was outstanding with it showing an average of +2.3 spd. Fantastic result!

The dial has very neatly applied indices all round with a neat cut out for the date complication at the 6 o’clock position. The logo is just printed and the text above the 6 o’clock position is neatly done, very legible, although I don’t think their choice of font is very good, it looks like the standard font used in Microsoft Word. A small niggle I know, but worth mentioning in my opinion. I would have preferred to have seen a much more original looking font being used. 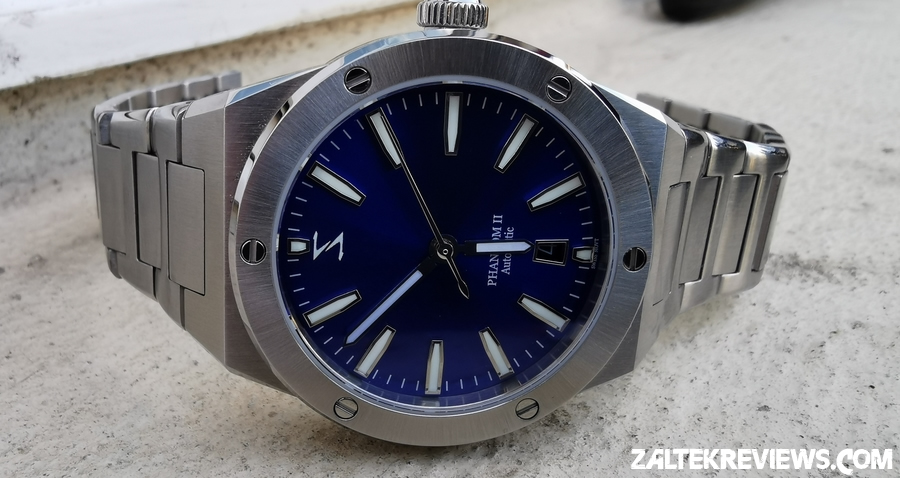 The hour and minute hands are perfectly in proportion to the dial and actually suit the sports watch aesthetic extremely well. The seconds hand is quite thin for my tastes but does reach out all the way to the minute track. The lume used on the Phantom II is Super Luminova® C1. A big upgrade over the mediocre lume used on the original. This dial version (sunburst) of the Phantom II that I have here would be my only choice, either in black or blue. The cushion dial style does nothing for me personally, but I suppose beauty is in the eye of the beholder and all that.

A fantastic looking sports watch that could easily be worn as a dress watch due to its slick looks and slender profile. The build quality, fit & finish are absolutely fantastic. My only niggles are no half links on the bracelet and the choice of font that’s been used on the dial. There are no perfect watches but the Phantom II does come close. Great overall specs with a surprisingly good choice of movement. I actually found it quite difficult to find faults with this watch and as previously mentioned the ones I did find are so miniscule I almost didn’t bother adding or pointing them out in this review.
Spectre Time – Excellent Job Gulshan! An absolutely fantastic looking sports watch. You should be proud of this one!
 9.5/10

A huge thank you to Gulshan for sending out the Phantom II so quickly. To view the Spectre website, or join their mailing list to be informed of new models etc, visit Spectre Time.
Follow us on Instagram and join our Facebook group WatchChat, a busy community for watch enthusiasts and collectors with tons of images and in-depth discussions.
At Zaltek Reviews, we encourage the companies whose watches we’ve reviewed to comment on our articles. We invite any company representatives to respond in the public comments section below. Thanks very much.
Tags: dress watch, phantom ii, spectre time, sports watch